The World Fusion show has won a national award for Best Entertainment and Arts Series 2019 in public access TV from the Alliance For Community Media, the foundation that oversees public access TV. The show is in it's 3rd year and just released Ep #68. Derrik Jordan hosts and produces the show which features interviews, video clips and live in the studio playing with World Fusion composers and musicians. A new show is released every 2 weeks.

The trip to Senegal with Tony Vacca in early 2013 was fantastic! Highlights include 5 gigs, two of them with Bideew Bou Bess, who are superstars in Senegal. One of those gigs was on Goree Island, which is the ancient slave port, just off the coast of Dakar. We did the concert in a small amphitheater on Goree near the old slave fortress where the slaves were imprisoned while waiting for the ships to take them to the New World. Intense place. During the show and just as I was about to take my electric violin solo the power went out. Tony Vacca covered for me on the balafon and percussion. I looked out into the audience and everyone had their cellphones raised and were waving their arms creating a sea of swarming blue lights like blue fireflies - so beautiful.

The Vermont Contemporary Music Ensemble led by Steven Klimowski (clarinet) premiered my new Brazilian inspired piece "Astonishing Visions" Feb 19 and 20, 2011 in Burlington and Montpelier, VT. The piece is in three movements: Berimbau Ghosts, Flower Kiss, and Circular Rainbows. It was well attended and was well received by an enthusiastic audience. The piece is written for 7 instruments: flute, bass clarinet/clarinet, bassoon, violin, cello, piano and marimba. The VCME has been playing and promoting new music by living composers for 25 years! Thank you VCME! 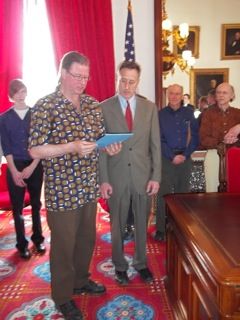 Governor Peter Shumlin signed a proclamation in Montpelier today stating that 2011 is the "Year of the Vermont Composer.." He asked me to read the proclamation before he signed it since we are both from Putney. Getting a little preferential treatment for a change. Ha! About 12 composers were present for the ceremony.

Windscape, one of the premiere woodwind quintets in the US premiered "Walk In Beauty"on October 18 at the Manhattan School of Music. "Walk In Beauty" is an instrumental arrangement of an original Brazilian flavored samba for flute, oboe, clarinet, French horn and bassoon. 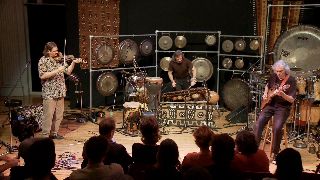 Impulse Ensemble has released its first CD! A world fusion power trio with Tony Vacca on balafon and percussion, Jim Matus on electric Greek lute and Derrik Jordan on electric violin, percussion and vocals. The band works with spontaneous improvisation based around African and Middle Eastern sounds. High energy, great chemistry and interplay make this band very special. Our CD release party will be in Brattleboro, VT on Sat Sept 18 at the Stone Church on Main St next to the Post Office. $10 admission or pay $20 and get the CD as well. Another Cd release party will be held in Northampton TBA. 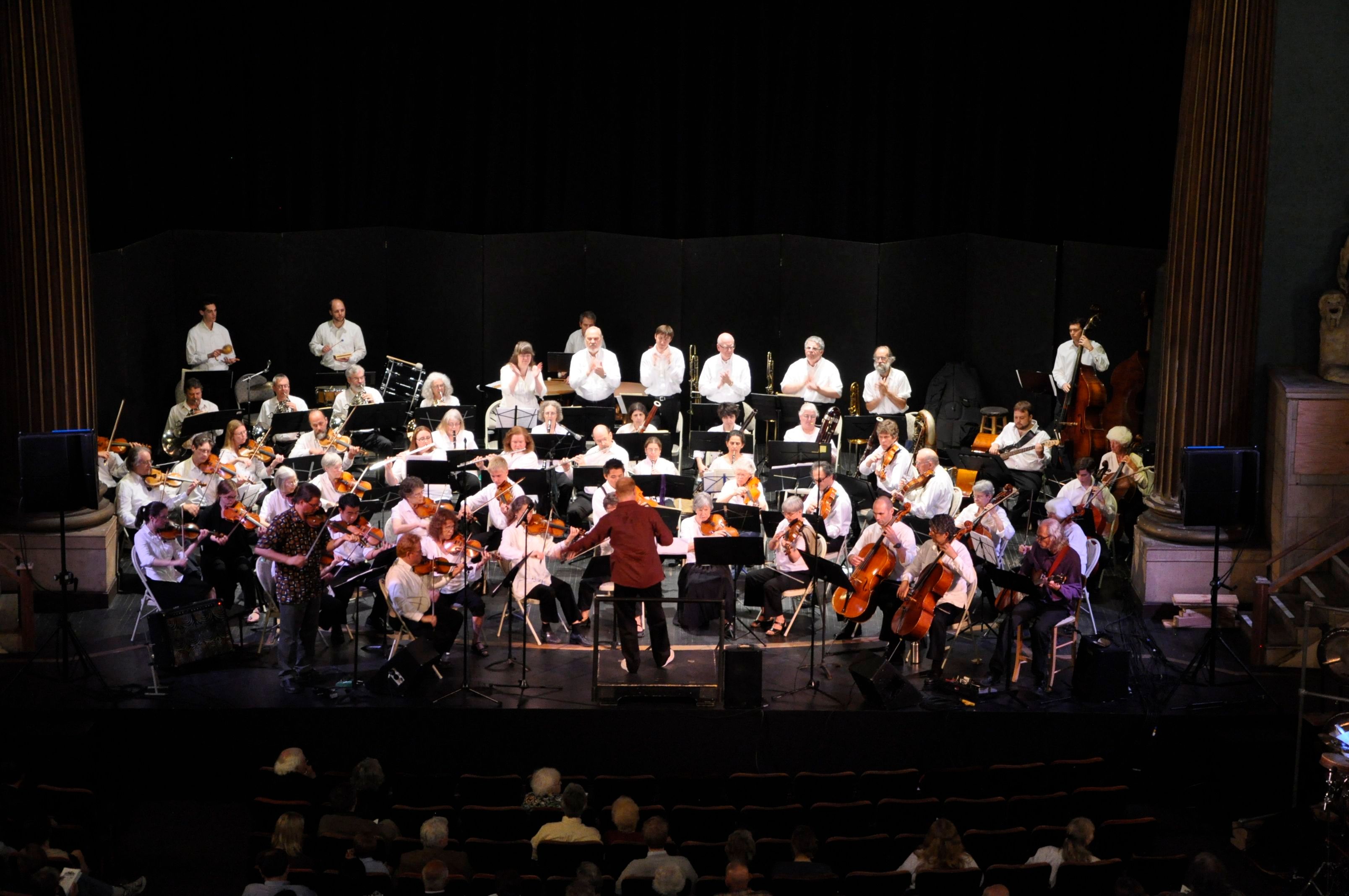 Windham Loops for full orchestra and my world fusion power trio Impulse Ensemble premiered at the Latchis Theater in Brattleboro, VT on June 12, 2011. The Windham Orchestra under the baton of Hugh Keelan performed the 30 minute 4 movement piece to a very warm and responsive audience. The piece was followed by Beethoven's 9th Symphony which was unfortunately cut short by a power outage. The concert was rescheduled and both pieces were performed again on July 10, 2011 - this time without mishap. You can see the video of excerpts of the piece on the home page. Windham Loops contains many world music influences - Indian, Middle Eastern, Pygmy/African, Balinese and funk. 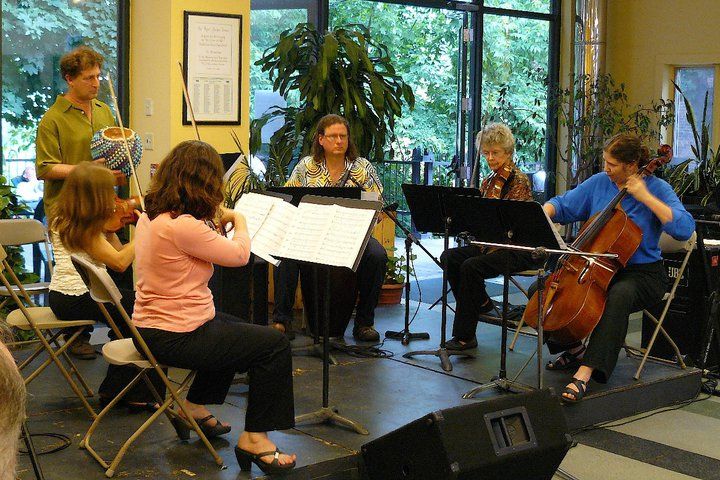 "Welcome Santo" for kalimba, shekere and string quartet was premiered at the River Garden in Brattleboro, VT on June 5, 2010 as part of the Heifer Stroll and the 35th anniversary of the Windham Arts Council celebration. It was performed with Derrik Jordan on kalimba, Julian Gerstin on shekere, Sabine Rhyne on cello, Lisa Ferrigno on violin, Michelle Liechti on violin and Peggy Spencer on viola. The piece is Derrik's 2nd world fusion string quartet and is heavily influenced by the music of Africa. It has three movements: Mbiraland, Gratitude For The Earth And Sky and That Buzzing Is The Ancestors Singing.

My new world fusion trio Impulse Ensemble made it's debut this fall. Featuring Tony Vacca on balafon, percussion and spoken word, Jim Matus on electric laoutar and vocals (greek lute) and myself on electric violin, percussion and vocals. The music is a high energy African/Middle Eastern fusion. We performed in Northampton at the Northampton Center For The Arts on Oct 30, 2009 and did a 3 camera high definition shoot to create a video to help promote the band. Look for Impulse Ensemble in the coming year playing near you. You can check out the video of performance excerpts (6 min) at http://www.impulseensemble.com. Let me know what you think. We are looking to get into some festivals this summer here and in Europe.

"Odzihozo And The Lake" performed by the Vermont Symphony

"Odzihozo And The Lake" premieres! As I announced in my last newsletter - I have been chosen to be the the featured composer for the Vermont Symphony Orchestra's 2009 "Made In Vermont" Fall Festival Tour. I received a commission to write a 12 minute piece for the VSO chamber orchestra. This year Vermont is celebrating the 400th anniversary of the discovery of Lake Champlain by Samuel de Champlain. The VSO wanted a piece about the lake and I thought it would be nice to write something that paid respect to the Abenaki, who, after all, were here long before that French explorer decided to name a beautiful lake after himself. The piece I wrote is called "Odzihozo And The Lake." Who is Odzihozo you might ask? Well, he is a supernatural being of Abenaki legend who created himself from the leftover dust that fell from the Creator's hands. He was pretty clever at making himself but somehow he forgot to make himself legs. So he dragged himself over the land pushing up mountains and gouging out rivers and eventually made Lake Champlain, which he considered to be his masterpiece. In fact, he liked it so much that he decided that he would stay there and watch over it forever, so he turned himself into a rock island that sits in the Burlington Bay. The piece tells this story in music. The piece was performed in 10 locations around the state of Vermont in the fall of 2009 and was conducted by Anthony Princiotti. It's been a lot of fun writing it and I've learned a lot in the process. It is written for a chamber orchestra of 28 people, which includes 1 flute, 2 oboes, 2 bassoons, 2 french horns, violins, violas, cellos, bass and a percussionist who plays vibraphone, timpani, bass drum and cymbal. I have worked two Abenaki musical themes (a greeting song and fragments of friendship song) into the piece to honor the Abenaki people and their connection to the lake and to Ndakinna, which is their name for Vermont.

Premiere of "Five Gamelans" I had the premiere of two movements of my piece for brass quintet (2 trumpets, French horn, trombone and tuba) at "Spotlight Indonesia," an evening of Indonesian music, dance and Indonesian inspired music in Brattleboro on April 30, 2009. The two movements are The Clown Prince and Mountain Of The Gods And Goddesses. The piece is called "Five Gamelans For Brass Quintet" and draws on the rhythms and scales of Balinese music. It is not traditionally Balinese but has some of the Balinese flavor. Gamelan is the name of the traditional Balinese orchestra that is made up of metallophones, drums, rattles and flutes.